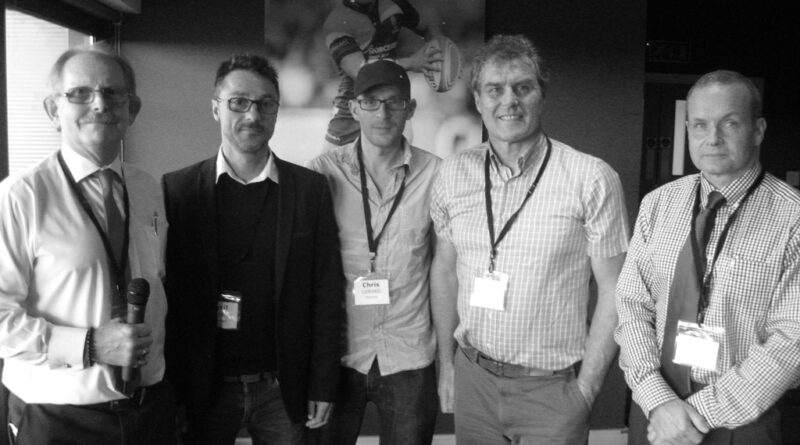 The 28th British Mastitis Conference was held on 2 November 2016, with a workshop on the management of mastitis data on the preceding day. There was an increase in the number of non-UK based delegates attending, many presenting Knowledge Transfer posters. The number of companies providing sponsorship for the conference was at a record level.

The conference is aimed particularly at veterinarians, farm consultants, research scientists, students and academics, in fact at anyone with an interest in dairy farming and mastitis. The organising and scientific committees bring together a mix of researchers and practitioners from both the UK and further afield, and for the 2016 conference, speakers were invited from Denmark, France, Brazil, as well as the UK.The European Mastitis Research Workers (EMRW) meeting was again associated with the British Mastitis Conference (BMC), and following the success of the inaugural event in 2015, the meeting was held over two days. The proposal for 2017 is to hold the EMRW meeting in Denmark.

The first speaker was Cyril Crosson, Research & Development Manager, Bioteck Lait, France who provided an update on milk amyloid A (MAA) & how it applied to dry

cow therapy. He stated that antibiotics used in animal production contribute to the development of antimicrobial resistance and are the subject of controversy in public opinion. In this context, some countries around the world advocate a cautious approach and the rational use of antibiotics in veterinary medicine. A selective dry cow therapy programme would enable a significant reduction in the use of antibiotics in dairy production. MAA is suggested in several studies as a biomarker of both clinical and subclinical bovine mastitis. Cyril advised that the research group conducted a field study to evaluate the efficiency of the measurement of MAA when used to make selective antimicrobial treatment decisions, on a quarter by quarter basis, on cows at drying off. From the data, an algorithm was developed to identify an intramammary infection (IMI) at mammary quarter level at the end of lactation. The algorithm is based on the MAA concentration and somatic cell count (SCC) results gathered prior to drying off and based on data collected for the cow and milk during lactation. The sensitivity and specificity of the algorithm were high at 94.5% and 93.0% respectively and the positive (PPV) and negative (NPV) predictive values were 96.3% and 89.9% respectively. The use of the algorithm in a selective dry cow therapy programme at the quarter level would allow a significant reduction in the use of intramammary antibiotics with confidence. Cyril Crosson concluded that in the study, the application of the algorithm would have reduced the use of antibiotic treatments by 29%.

The next speakers were Peter Orpin, a veterinary practitioner at the Park Veterinary Group in Leicester, UK who presented his practical experiences with selective dry cow therapy, together with Chris Gerrard, the herd manager at one of the practice’s dairy farm clients.  Peter advised that Blanket Dry Cow Therapy (BDCT) has been widely accepted by UK dairy farmers since the adoption of the Mastitis 5-point Control Plan. The use of antibiotics in non-infected cows has been brought into focus with concerns regarding antibiotic resistance. Selective Dry Cow therapy (SDCT) has recently gained momentum in the UK but with mixed results. His paper described the practical experiences in a veterinary practice in Leicestershire and highlighted the experience of one successful proponent of SDCT. The experience in practice has shown that successful SDCT requires detailed training of staff and significantly improved drying off techniques to avoid severe mastitis or mortality.  The presentation included a video showing how Chris successfully applied dry cow management and therapy, minimising contamination and highlighting the importance of carrying out the procedure in an organised and dedicated way.

Prior to the conference, Peter carried out a Survey Monkey review of 291 farmers’ attitudes towards SDCT and the results were discussed. The survey revealed that 80% of farmers believed that reducing antibiotic usage would be good for their livestock but 54% feared that SDCT would result in death or mastitis without antibiotic use. Some 17% had experienced severe mastitis and death of cows after infusion of teat sealant alone. And 50% of farmers would recommend SDCT to another farmer. However, the Net Promoter Score (a measure of customer experience) revealed there were more detractors (51%) than promoters (26%) indicating that without external support and encouragement the program may fail, if relying solely on farmer recommendation. A division of the farmers into three groups, namely Proactivists, Unconcerned and Disillusionists, revealed that the requirements to engage each group differed. Proactivists were interested in training and veterinary support whereas the other two groups required more convincing that SDCT would work and that the benefits outweighed the risks. The discussion focused on the next steps to be considered if SDCT is to be expanded successfully in the UK, taking into account the relative importance and beliefs of the farmers.

John Baines, Technical Director at Fullwood Ltd in the UK discussed the latest developments in automated parlour technology to detect mastitis. John endorsed the fact that mastitis is one of the main production diseases of dairy cows. The presence of high levels of mastitis pathogens, in raw milk at least, can constitute a risk to human health and is regarded as an indication of less than adequate milking methods. He advised that there are also many published scientific papers discussing a myriad of possibilities for automated sensors for mastitis. In spite of this, the range of technologies being used in practice is relatively limited. His paper set out to discuss the application of sensor technology as a tool for compliance with legislation and to manage udder health.

Elizabeth Berry, one of the joint organisers of the BMC and a board member of the British Cattle Veterinary Association, presented a summary of some of the papers presented at the 6th International Dairy Federation’s Mastitis Conference in 2016.

The final paper of the 2016 BMC was given by Michael Farre from SEGES Dairy Research, Arhus in Denmark on the practical application of on-farm culturing.  Michael advised that on-farm culture has received increasing attention over the last years, because of the constant focus on consumption of antibiotics for intramammary treatment and cost cutting. Farmers can benefit with the application of a simple and easy-to-use system for selecting treatment or non-treatment. Based on small scale preliminary experience, a larger ongoing project was founded by the Danish Milk Levy fund. The aim of the project was to gain experience with on-farm culturing and, as a side effect, reduce the number of mastitis treatments and the use of antibiotics. Material was developed for training purposes for both the herd veterinarian and the farmer. Initially, an introductory workshop was held, presenting the material and some hands-on experience working with the Selma Plus agar plates. Next, the veterinarians trained the farmers and made a regular follow-up on sampling, culturing and decision-making. Culture positive plates were sent to the Danish Veterinary Institute for verification using Maldi-Tof spectrometry.

Michael concluded that the application of on-farm culture could be a tool in reducing the number of treatments and therefore the consumption of antibiotics. The system, naturally, has its limitation, because farmers are not trained in working with microbiology.  According to the literature, through close co-operation with the herd veterinarian and follow-up diagnostics, Michael suggested it can be applied successfully at farm level especially where there is a high level of management.

The 2017 British Mastitis Conference will be held on Wednesday 15 November 2017, with the workshop on the previous day. More information is available at www.britishmastitisconference.org.uk