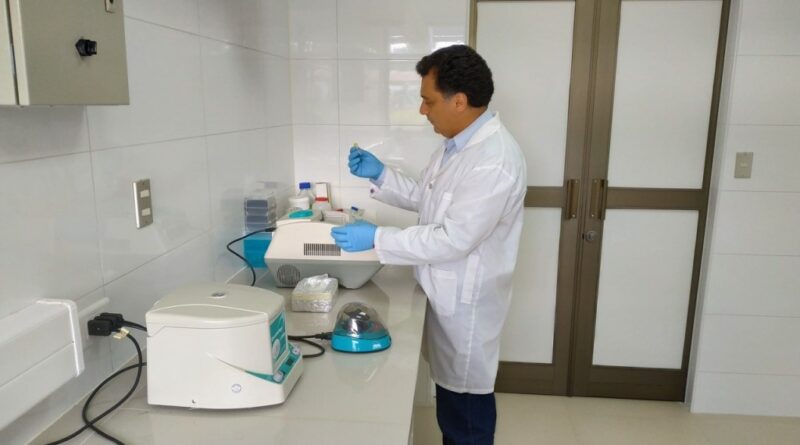 Prof. Marcos Muñoz at work in his laboratory in Chile

He collaborates in mastitis research with different countries and he is the vice president of the Latin American Mastitis Research Network, RELIM. M²-Magazine spoke to him about RELIM and about the dairy industry in Chile.

M²-Magazine: Prof Muñoz  – you are involved with RELIM. Just what is RELIM and what does it do?

Prof Muñoz: RELIM is the Latin American Mastitis Research Network – the acronym stands for the Spanish “Red Latinoamericana de Investigación en Mastitis”. RELIM is a non-profit, professional network of milk quality and bovine mastitis control people and it connects these specialists across all the countries in Latin America. RELIM was founded in January of 2012 in Saint Pete, Florida with the stated aim of providing an equal opportunity, open organization for all countries in Latin America.

Contrary to what some people may think, the Latin America countries have some cultural similarities, but also, are very diverse, not just geographically but in many other aspects. RELIM, therefore, as a professional network, has as a main goal – the improvement of the exchange of knowledge about intramammary infections affecting herds in the various dairy production systems used in the countries of Latin America, with the ultimate aim of providing top quality milk produced with environmentally sustainable standards.

The members of RELIM include professionals from the milk production industry and dairy processors, researchers, milk quality consultants, young veterinary students and graduate school students. Many outstanding professionals and their institutions have been actively involved in RELIM during it’s almost eight years of existence.

The dairy processing industry has been very supportive of RELIM and it’s values since it’s foundation; and it worth mentioning the valuable collaboration of commercial firms including Hipra, MSD (Merck) Animal Health, CID Lines and DeLaval along with many others.

RELIM has taken many initiatives since its foundation.  The first annual meeting held in Colombia in 2013 had as a main objective the presentation of the milk quality situation in the various countries in Latin America in a critical but very informative way. The following annual meetings in Costa Rica (2014), Chile (2015), and Uruguay (2016) addressed several important milk quality initiatives, topical at the time, and gathered veterinarians, dairy consultants and dairy specialist from the host countries and from an ever-growing international audience.

Addressing relevant topics in a comprehensive way has been one of the main commitments of RELIM.  For that reason and to aid our discussions, we have had the generous collaboration of prominent international speakers at RELIM´s annual meetings, such as Ynte Schukken, Andrew Bradley, John Middleton, Gina Pighetti, Andrew Biggs, Volker Kromker, Frank Welcome, Raul Almeida, Paolo Moroni, and Lorraine Sordillo, along with other outstanding mastitis experts and researchers. The on-going objective of RELIM is to provide an open, technical discussion forum to approach the specific and diverse milk quality issues that challenge veterinarians and the industry.

Since the 2014 meeting in Costa Rica, RELIM started to provide the opportunity for young researchers in milk quality to attend.  In the following meetings, RELIM granted funds for young students and professionals to attend and present at RELIM´s meetings.

As a follow up, one of the most recent initiatives that RELIM has undergone is to team up with the National Mastitis Council (NMC) in the RELIM-NMC program. This enables one person, selected by RELIM, to attend an NMC annual meeting.  It is an invaluable experience for a young talented person to be part of such a prominent and professional organization.

However, we are also conscious of the people who have worked in this field in the past. As is often said “we step on the shoulders of those that worked hard before we did”.  We had the opportunity to recognize these people at RELIM Costa Rica and RELIM Chile; including one person who is no longer with us having passed away some time ago. I am glad we made what was a timely recognition.

RELIM’s collaborative network has contributed to jumpstart the active exchange of knowledge among people from the member countries, by means of seminars, graduate courses, student exchanges and graduate level collaborative work.

For the immediate future, I hope that RELIM´s collaboration with the NMC will continue to develop. In November 2019, RELIM will hold its fifth Annual Meeting in La Plata Argentina, and at that meeting NMC will be involved for the first time. My hope is that our collaboration with NMC will strengthen over time.

M²-Magazine: Can you give readers a word picture of dairy farming in Chile?

Prof Muñoz: Stretching from it’s border with Peru in the north to the southernmost tip of South America and with a 4,300 kilometer (2,700 miles) coastline along the Pacific Ocean, Chile has one million hectares of pastures. The country has approximately 450,000 dairy cows across 4,600 commercial dairy operations.

According to data provided by the Chilean governmental agency, ODEPA, in the last 15 years milk dairy reception by main processors grew by 55%.  In the same period exports, (in USD$ terms) of dairy products have grown 135%. Nevertheless, imports of dairy products have exceeded exports during the last four years, reaching a negative balance for the year 2018 (i.e. 388 million USD$ imports versus 199 million USD$ exports).

Dairy reception by the main processors for year 2018 was 2.2 billion liters produced in the three main dairying zones of Chile (see Figure 1).  The Central and Central-south zones produce 9.5% and 12.5% of the Chilean milk, respectively. In contrast, the Southern zone (“Los Lagos” and “Los Ríos” regions) produces 78% of the milk in the country (Source ODEPA, 2019).  The most common herd size in commercial dairies ranges between 50 and 300 milking cows.  However, large dairy operations, with between 400 and 1,000 or more milking cows, are common in the pasture-based Southern dairy zone.  Holstein-Friesian is the main breed in commercial farms of the mainly confinement-based Central zone and Central-south zones.  In the Southern zone, Holstein cows are common, plus other breeds such as Kiwi Cross, Jersey, Montbéliarde, and “Overo Colorado”.

With an open market economy, over the years Chilean milk producers have had to improve the efficiency of the primary sector to remain competitive with imported dairy commodities. In this context, dairy operations have adopted modern technologies and practices. Traceability of cattle in Chile is mandatory by law and each individual animal has unique ear-tag number or DIIO (Spanish acronym for “Dispositivo de Identificación Individual Oficial”), and animals can be traced back to specific operations over time. And additional electronic identification systems are often used for on-farm automatization of logistics, data and herd management. Robotic milking is not common but it has been increasingly adopted by dairy producers, in both pasture-based and confinement systems over the last years. As an example, Chile has one of the world’s largest robotic milking dairy operation milking 3,600 dairy cows using 64 VMS robots in the Central-south dairy zone.

In terms the adoption of correct dairy practices, the Chilean Government and Chilean Dairy Consortium (“Consorcio Lechero de Chile”) have collaborated in the implementation of dairy standards and protocols.  Particularly, animal welfare of dairy operations in Chile is regulated by law (the Animal Protection Law) and standards are followed and monitored by both the processing industry and the producers, and enforced by the governmental agency SAG (Agricultural and Livestock Services), The implementation of such protocols has been successful after a proper run-in period and with practical on-farm advice and training. The National Committee for Animal Welfare in Dairy has played a key role in monitoring and validating the protocols. ”.

Regarding the health status of Chilean dairy herds, we are fortunate that for Foot and Mouth disease Chile is clear (and without vaccination) since 1987. And bovine Tuberculosis (bTB) prevalence has decreased over time. It has been controlled and eradicated in southern zones of the country and continues to be under control in the central and central-south parts of Chile.  And there are similar downward trends for Brucellosis and other bovine diseases.

The monthly incidence rate of clinical mastitis in dairy operations fluctuates at around 2% to 5% in year-round free stall confinement systems.  In the pastoral seasonal systems (usually southern zones) there is an increase in clinical mastitis in the 30 days post-partum period with their harsh (muddy) winter conditions in these zones.  The most common pathogens for clinical mastitis in the Central zone are E. coli and coliforms, but also, and becoming more common, are Strep. uberis and CNS.  Overall, clinical mastitis are usually associated with Strep. uberis, CNS, and Staph. aureus. On the other hand, Mycoplasma bovis and Mycoplasma spp.  despite being cultured only in specific laboratories and found prevalent in certain operations, this group are reportedly considered of low prevalence among herds.  Similarly, Prototheca mastitis has been described in the country in specific herds. Regarding Strep. agalactiae mastitis or intramammary infections, prevalence between herds are consistently considered zero or close-to-zero; thus any Strep. agalactiae positive culture is considered an extremely rare event.

Because of the milk payment systems are strongly based on milk quality parameters, milk producers have their bulk tank milk SCC evaluated regularly during the month (at least twice a month).

In the last few years, in Chile there have been new regulations and prohibitions on the use of antibiotics in cattle. To cope with these measures requires farmers need good quality and consistent records, and a programme of preventive measures aimed at housing hygiene and milking hygiene protocols. Only then do farmers have a solid basis for the proper use of antimicrobials in their herds.

In terms of CFUs in milk quality, the levels of colony forming units are around 22,000 cfu/mL, with many farm operations having levels below 10,000 cfu/mL. Very well-managed dairies have values below 5,000 cfu/mL. On-farm training of the personnel, motivation, follow-ups, and the involvement of the owner, veterinarian, and the administrator are the key factors in successful dairies in keeping their hygiene and udder health at the highest levels. 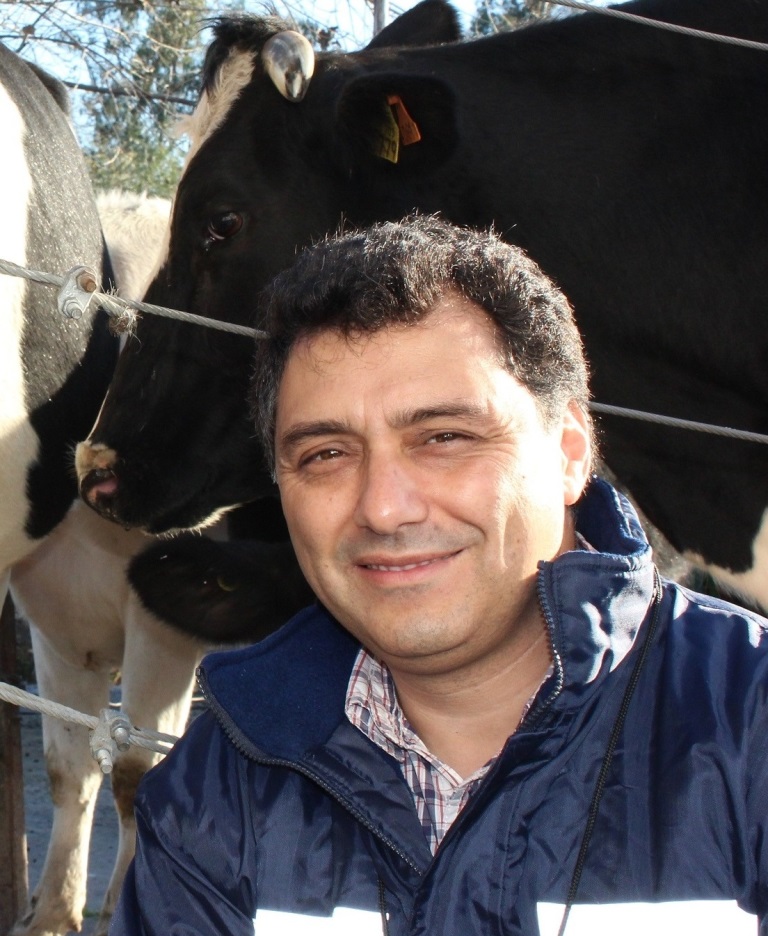 Dr. Marcos Muñoz of the Universidad de Concepcion in Chile